We all make art! It is part of culture. It is deeply rooted in human nature as a way of communicating with others. We all need to tell our stories because it is stories that link us all. We are all one, one creative mind! Though, all unique and equipped with unique ways of expressing ourselves. We live in constant search of that unique liberating voice.

At Walk the Arts we aim to facilitate our art makers to explore new territories. Our painting classes and art history trips on three continents are meant to be rounded art experiences among small groups of like-minded adults. We offer an environment that fosters creativity.

As we always say, art as religion is just a matter of faith. This blog is about living fully the experience of art, about finding our single artistic path, about the joy of art making. We believe that making art accessible to all will lead to a betterment of our society.

The Marvelous in the Arts

A Walk the Arts’ friend, the artist Gregg Simpson has been made an official honorary Portuguese Surrealist! His show of the 1970’s Claw series and other Hermetic works opens tomorrow in Estremoz, Portugal. What follows is an excerpt of Prof. Yves Larocque  thesis on English Canadian Surrealism (translated from French). 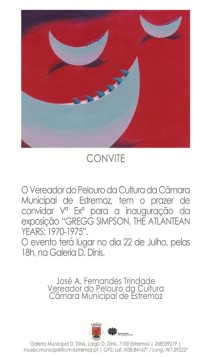 In his book, José Pierre (official heir of Surrealism at André Breton’s death) described Vancouver artist Gregg Simpson as a “tireless organizer of the West Coast” and a “tireless experimenter,”  (L’univers surréaliste, Somogy, 1983).  Around 1970, Simpson was actually the inspiration of English Canadian Surrealism.  At the time, he sounded the alarm to warn the people of the agony of the “mindset” essential to achieve the  marvelous, an important idea of surrealism. Since the early 1970s, from the top of his belfry, he warned an art in distress; he also railed against “superstars” of art:   «All big-name art, or super-star, blue-chip investment art is still lacking the essential research that goes into the state of mind that lead to magical art […] People think that a finished work is the idea. They’ve missed the state of mind that created the work, and that is the part you can take with you into the spirit which is eternal» (Vancouver Magazine, 1976).

And Simpson proposed a way. For art to reach this “mindset”, we must not only tap into the field of fantasy art, but also rely on First Nations’ philosophies (American Indians),  the very ones which the Parisian Surrealists were formerly supporting during their exile in New York during WW2. Such remarks convinced Édouard Jaguer (another Parisian Surrealist) to include Simpson in the wake of Phases (an international surrealist group). Simpson also persuaded José Pierre, in 1980, to draft a joint mission under the French Conseil national de Recherches Scientifiques (CNRS) and the Canadian Social Sciences and Humanities Research Council to study on site the “relationships of surrealism and Canada in the past as in the present.” In a letter to the Arts Council of Canada, which recommended a scholarship for Simpson, José Pierre wrote, while evoking the Canadian mission, “Of course I promised myself to give Vancouver a special attention and if there is someone I have to meet in this city, it is certainly Gregg Simpson himself …”

This site uses Akismet to reduce spam. Learn how your comment data is processed.